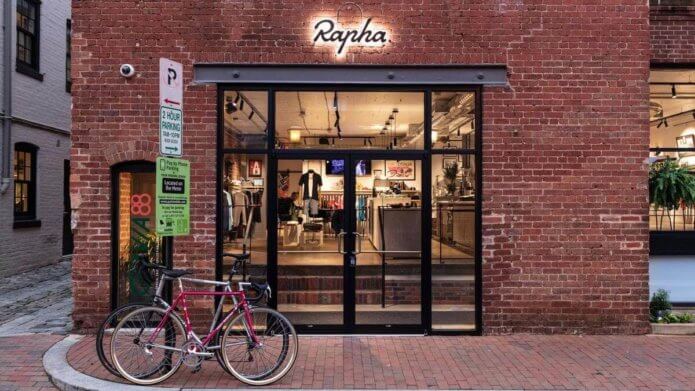 How does a small UK cycling apparel brand become the global benchmark for brand community management? Here’s why brands around the world use Rapha as a best practice case study.

In case a cycling jersey isn’t yet part of your casual wardrobe, this story about brand community management may change that when bike apparel may well set trends in mainstream clothing by 2025. 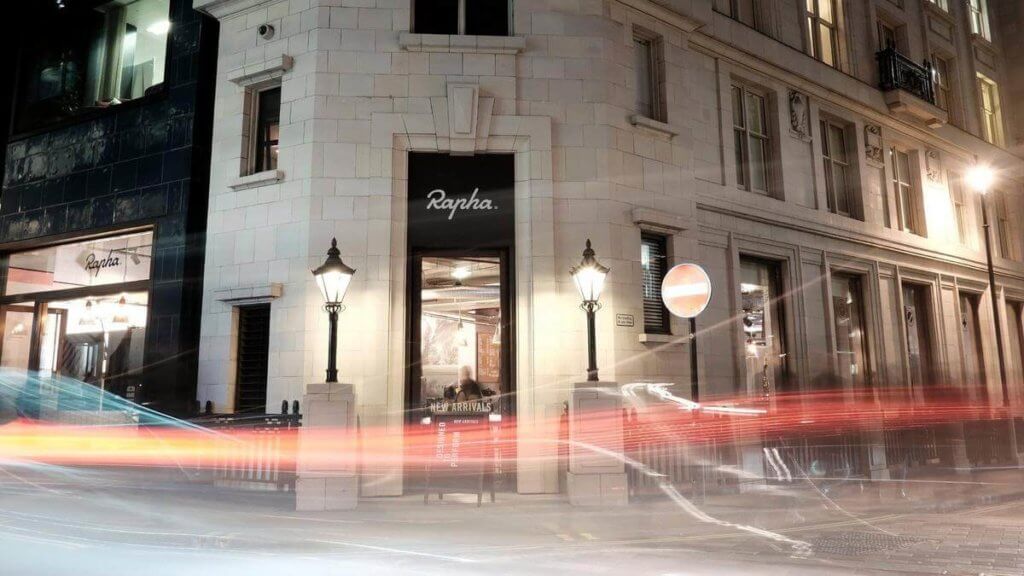 Rapha is a premium brand for cycling gear, founded in 2004 by Simon Mottram in the UK. Rapha sells only direct, via their own stores (currently 22) in major global capitals as well as online. If you are active in sports, but have never heard of Rapha, that’s likely because you won’t find them in any of your favourite sporting goods stores. They also hardly invest in regular marketing, other than in sponsoring and their exclusive membership programme. So how did this niche brand that achieves less than GBP 100mn in sales become a much talked about brand in community management globally?

Rapha is based on a strong membership programme that grew from 600 to 10.000+ members within three years. That’s even more unique considering that this is a payed membership programme. And unless you ride over 35km/h on average, you won’t even qualify.

To understand this brand, I strongly recommend experiencing one of their retail locations. At first sight, the stores seem like regular cycling stores. You’ll notice immediately that cycling gear rather than bikes as such dominate the assortment. The few used bikes on display are available for hire at EUR 25 a day, to members only. 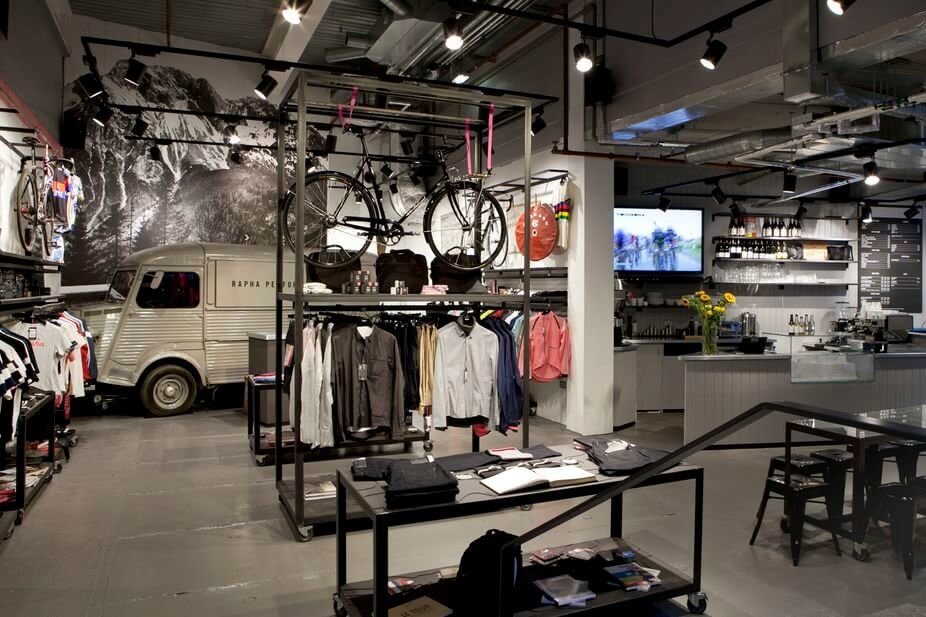 Not having bikes for sale theoretically reduces the average ticket of the store. The assortment has a premium price tag and the choice and density of assortment is less than 10 items per m2. And another feature challenges retail productivity: a cafe. But more interestingly, the store’s features and branding clearly convey that it’s a highly sought-after clubhouse rather than a mere store.

Rapha began with physical retail in 2010. At first with pop-up stores, followed by fully-fledged retail locations, only to evolve to clubhouses around 2014. Qualifying for club membership comes with an annual fee and a dress code. Members embody Rapha’s brand identity in exchange for a daily free coffee during the regular pre-work team rides. In return, they get to choose from 150+ rides per week in 80+ countries around the world.

Members who travel internationally and don’t want to haul extra luggage need not worry. Top bikes are available for hire at every clubhouse “to ride with the world biggest cycling club”. 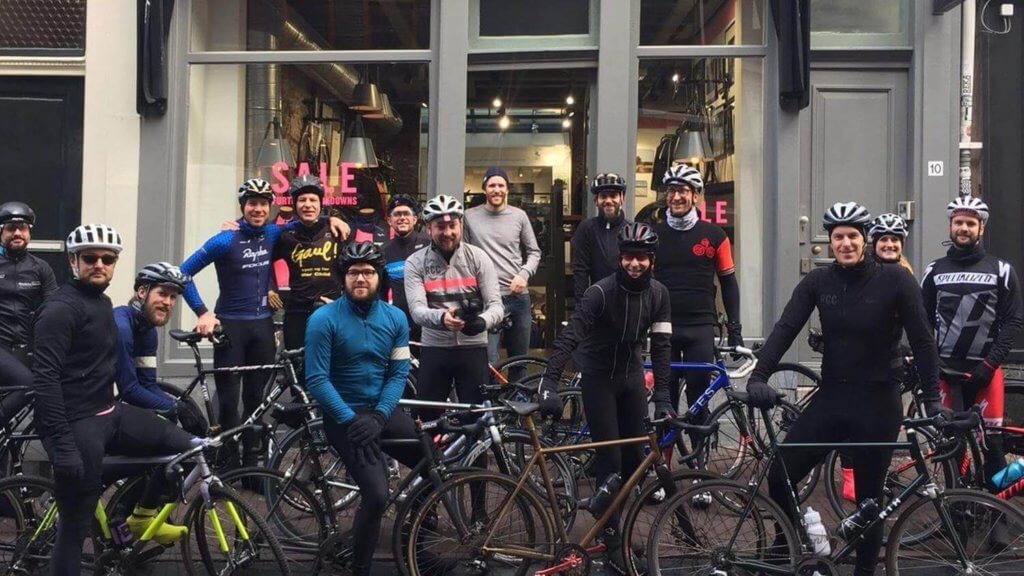 One of the weekly 150+ early morning tours (Photo: Rapha)

Members self-organise via an app. Flavour that with other club events like workshops on tour planning or sponsored photo weekends, and you have a deeply engaging community management programme.

Why Is Rapha the New Harley-Davidson?

We owe this very catchy comparison to Bailey Richardson, a pro at community building. Her post on Rapha’s brand community management is required reading for all brand & retail executives. In essence, she argues that Rapha successfully focuses on community building before product selling. 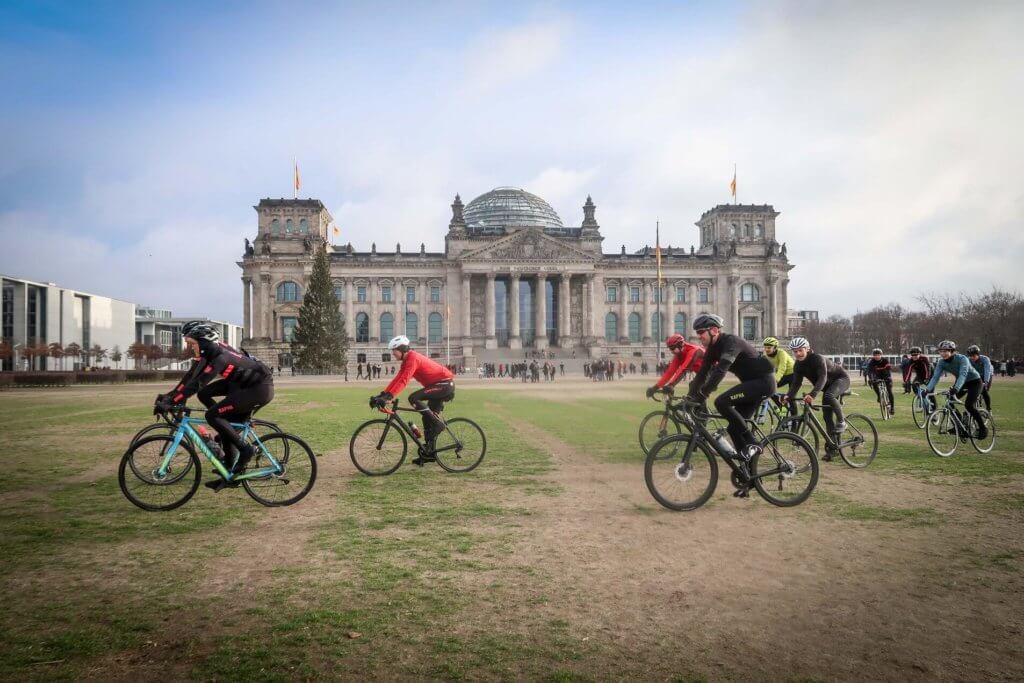 Sounds simple enough. But imagine someone had advised you in 2014 to address future store traffic challenges by charging your customers an annual membership fee of GBP 125 and inviting them to visit your store once or twice a week at 6.30 am. Imagine you were told to just offer customers a free coffee while making them buy the clothing required to even participate in your community rides. That would probably have sounded like terrible advice. But that’s exactly what Rapha did, and it seems to be working quite well.

To understand why, I recommend watching this very enlightening video featuring Rapha founder Simon Mottram. He explains to the point how he builds brand aspiration.

The sport is amazing, actually what they do, how they do it, the history, the culture, incredible aesthetic, amazing stories. So there is that huge wellspring of ideas, that no one was talking about. I wanted to put together how amazing this sport was. Nobody had applied that to (bike) clothing, nobody has pulled this together that really reflected how amazing this sport was and bring this to more people. That is why Rapha is born.

So the brand’s ‘why’ is not selling, it’s to make us aware of a unique and exciting sport. And he rightfully believes that Rapha “may have the best why in the world”.

Mostly, yes. But Rapha’s success in brand community management comes out of nowhere. Simon Mottram was a hardcore cyclist and in a previous business he consulted brands like Chanel and Burberry on branding. 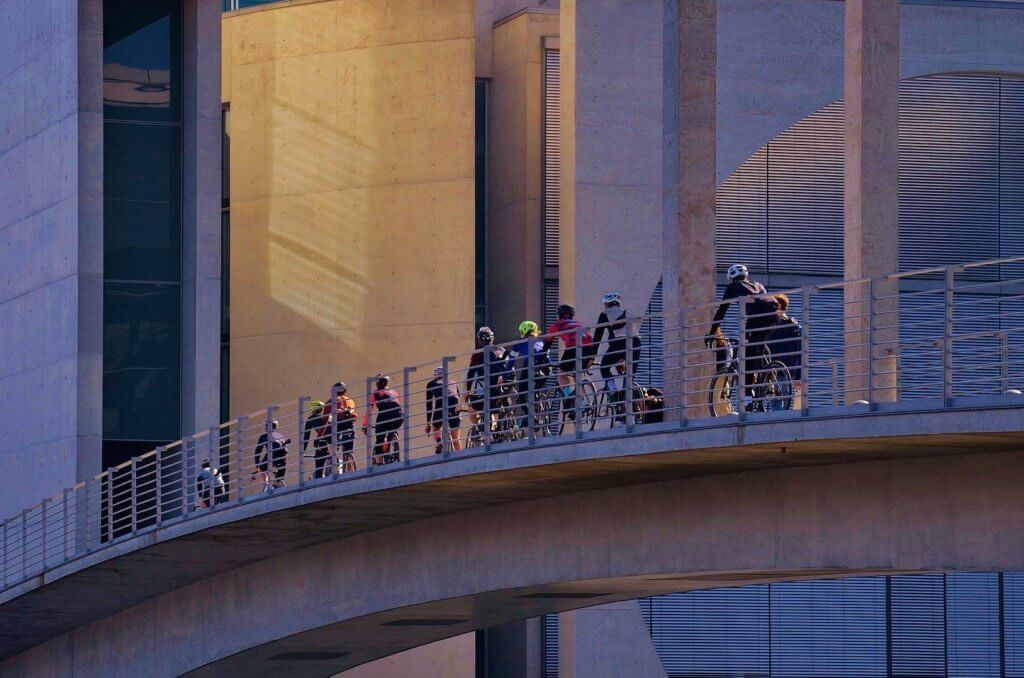 When founding Rapha in 2004, Simon had connections to brand growth money and obviously strong expertise in building a premium brand. But it seems that didn’t help much, as he shared with BOF: it took 200 meetings to raise GBP 150k to start. Because online retail was just in the making, hipsters were not into cycling yet, and MAMILs (middle-aged men in lycra) were still largely confined to swinger clubs. At the time, investors just couldn’t see how “to turn a niche sport into a lucrative platform for a global lifestyle brand”. 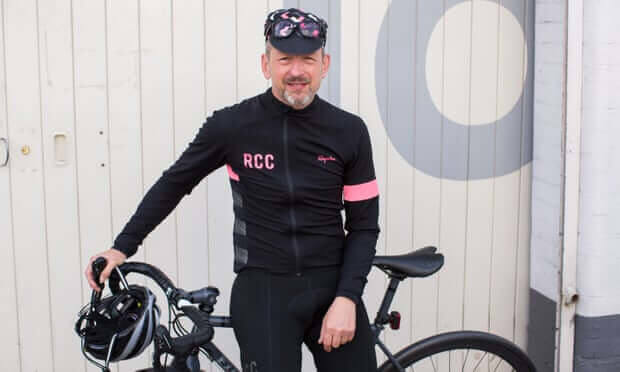 Is Rapha profitable? It was, for most of its life, as Lean Luxury reported in 2017. But the last sales growth and profits published in January 2018 showed growth alongside a significant loss. That all happened right after Rapha got new shareholders, with the Walmart grandsons Steuart and Tom Walton. To be fair, it is not known how much of the loss was due to extraordinary costs related to the change in shareholders. What we do know is that this change also brought layoffs, and that we have yet to see any fast expansion with the fresh money. But the Walmart’s, both cyclist, certainly wouldn’t have paid 44 x Rapha’s EBITDA purely to qualify as members. 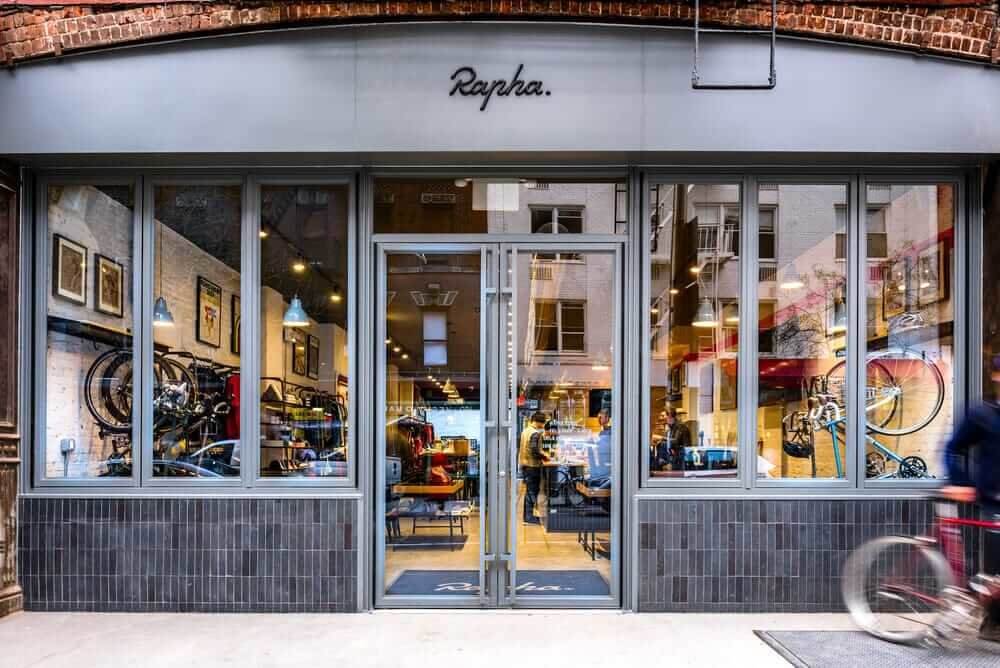 Two things are certain: we will hardly see Rapha on sale at Walmart stores. And with the UK and Australia, two relatively small cycling countries are still leading Rapha’s brand awareness by far. With strong cycling nations like France or Italy trailing far behind, there is no worry about the potential for future growth and expansion. 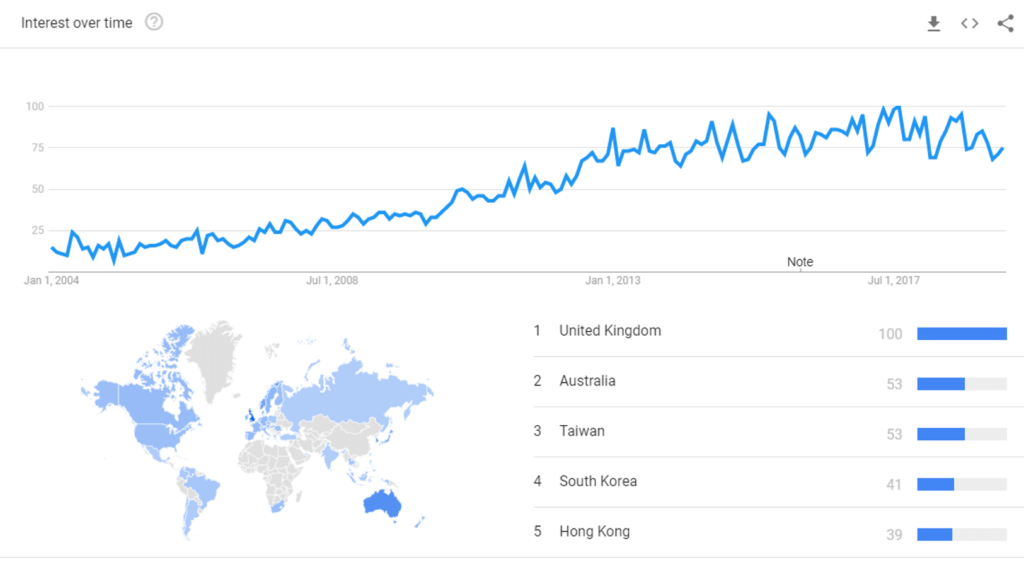 The global interest in Rapha merchandise has been growing consistently, but the large cycling nations still have to catch-up on the UK success in (Graphic: Google Trends)

If you think 100 global stores must be the limit to this niche market, allow me to quote Simon one last time:

What I would like to do — which is what the surf brands have done — it is to take the idea of a sport and project it into clothing that anyone can wear at any time.

The global market for surfwear was estimated to be worth $15 billion in 2018. Just 20% of that in cycling wear would be a huge market to grow into. And would you be willing to bet that by 2025 consumers around the globe don’t have one cycling-influenced casual in their closet, next to their surfwear shirt and shorts? I wouldn’t. But then again, I also cycle. Let’s see how Rapha continues to lead the peloton in brand community management.

Guido Schild gave up his car two years ago, and has been a frequent cyclist since long before. While 50+ km tours are a favoured weekend activity of his, as of yet, Rapha’s fast ride club tours to Berlin’s perpetually unfinished new airport runways remain an unachieved aspiration. Read his more of his articles here or connect with him on LinkedIn.